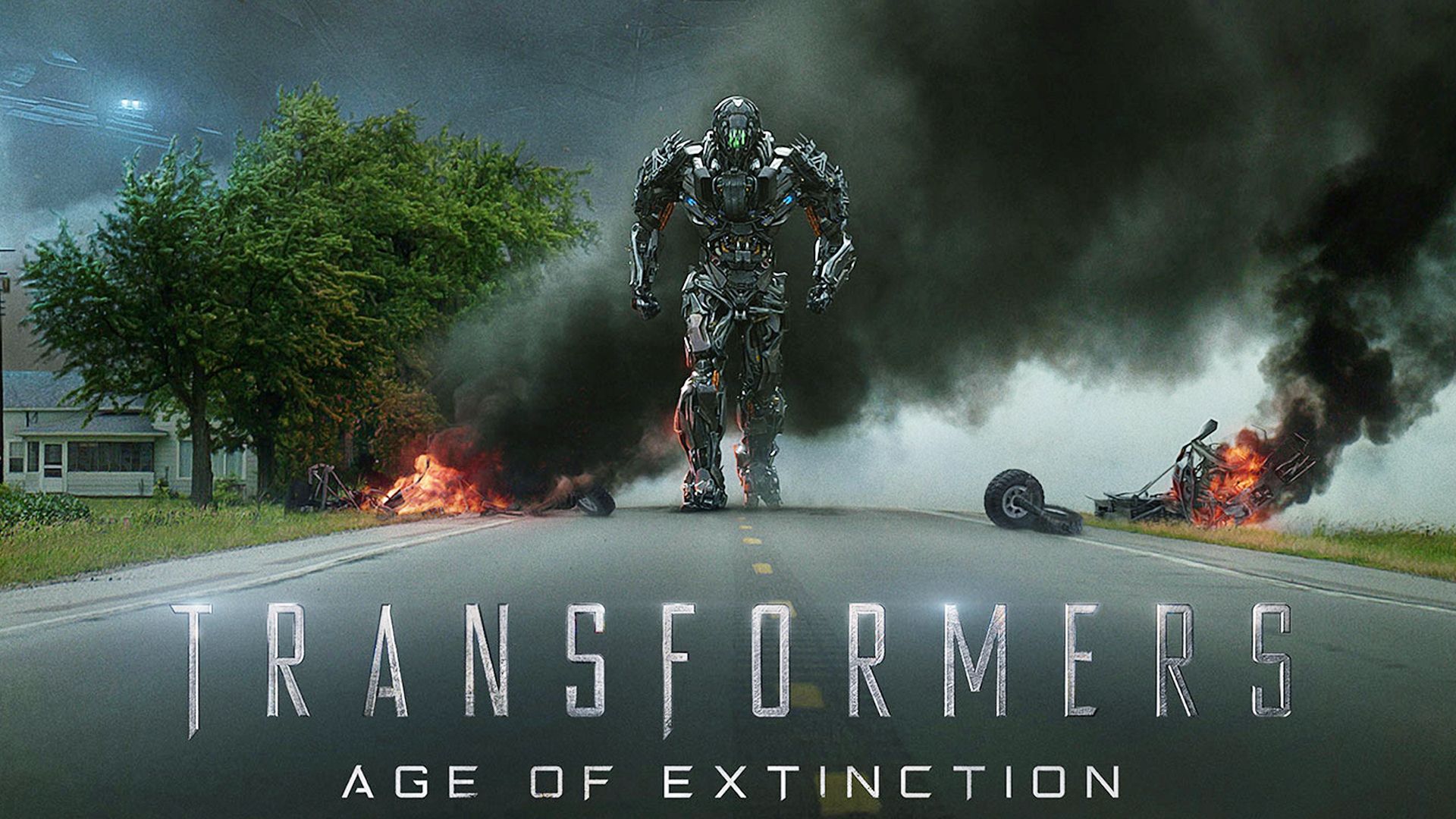 First off, let us not start into another discussion on Michael Bay and whether or not he raped our childhood or saved the Transformers or is the devil incarnate or whatever. Personally I am not a big fan of Transformers live-action movies except for the first one, but that is another discussion entirely. Here and now I want to tackle the following premise: I’m the writer of the Age of Extinction story. The studio has laid down on the law on which characters to include and some plot elements that need to be put in place for movie 5. Same actors, same characters, we’re starting after the events of Dark of the Moon and need to end in a similar place with Optimus heading off into space to find the creators. But between those two points, I want to write a good, entertaining story without legal loopholes for statuatory rape and pretty much everyone behaving like idiots.

Prelude: in the distant past we see a fleet of alien ships above a barren world. An alien hand presses a button and a cube-shaped object crashes to the surface. It’s the AllSpark Cube and moments later the energy surges and the first robotic life forms rise from the surface. Cybertron is born.

The present: A television broadcast announces the status quo. Ten years have passed since the Battle of Chicago and the defeat of the Decepticons. All is not well, though, as large portions of the public are suspicious of the Autobots as well and consider them dangerous by their very presence. All Autobots on Earth currently live in Autobot City, a cordoned-off “reservation”. Neither humans nor Cybertronians are all that happy with this state of affairs, but the Autobots have nowhere else to go now that Cybertron has been destroyed. Liasion between Autobots and the United Nations is Harold Attinger, who has no particular love for the Transformers and is also busy with a secret project that, should it become necessary, will solve the Transformers problem once and for all.

Enter Cade Yeager, a former citizen of Chicago, now living in Texas with his daughter Tessa. Cade lost his wife in the Battle of Chicago and holds a big grudge against the alien robots. His daughter Tessa has her own problems: she wants to head off to university and, seeing as her father has little money, earns extra money through illegal street racing. Unfortunately her car has crapped out on her last race and she neeeds a new one without letting her father in on her activities. Enter a blue Bugatti car found abandoned and damaged on the side of the road. Tessa convinces her father to bring it in and together they repair it. In the process they discover that the car is not a normal car, though. Before they can decide what to do, the car transforms and a Decepticon symbol becomes visible. The two of them panic, but the robot introduces himself as Drift. He means them no harm and he needs their help: he needs to get in contact with Optimus Prime, because a greater threat is on its way to Earth right now.

We start with a flashback and see Drift and some other generic Decepticons on an alien world, fighting an elite Autobot unit: the Dinobots. Before the battle can truly commence, though, a vast space ship appears overhead and a horde of drones take down the fighting Transformers. As Drift awakens, he sees the leader of the third party: Lockdown. His ship is filled with captured Transformers, Autobots and Decepticons alike. Lockdown tells his crew they’ve got one more stop to make, then their mission is complete.

Drift manages to escape from his cell and accesses the navigation data. They are heading to Earth and apparently Lockdown hopes to find Optimus Prime and Megatron there. Being discovered, Drift escapes from the ship in his protoform mode and streaks ahead, but is fired upon and damaged. Arriving on Earth ahead of the ship, he crashes and manages to scan a passing car for disguise before going offline due to damages.

Back in the present Cade reluctantly makes a call to the Pentagon and, after getting a bit of a run-around, is finally connected to Attinger. Attinger contacts Optimus Prime in Autobot City and a few hours later a military transport touches down near the Yeager’s farm, containing Optimus, Attinger, Bumblebee, and Sideswipe. At first no one trusts the story of the Decepticon, but Optimus has heard of Lockdown before. Before they can deliberate further, though, they receive an SOS from Autobot City.

Lockdown’s ship has appeared over Autobot City and attacks, quickly overruning and rounding up the Autobots present. Ratchet, left in command, fights to the last, but is taken down by Lockdown. Lockdown then delivers an ultimatum to planet Earth: either give him the remaining Autobots, including Optimus Prime, or he will lay waste to the planet. Attinger calls his superiors and Optimus Prime agrees that, for the moment, they have no choice but to agree to Lockdown’s demands. A meeting takes place and Optimus, Sideswipe, and Bumblebee agree to surrender. Lockdown is happy, saying that the playing field is now swept clean. Once Optimus and the Bots are restrained, though, he orders his drones to kill the humans (Attinger, Cade, Tessa, assorted Attinger underlings). Optimus, having suspected something like that, orders Drift to open fire, releasing him, Sideswipe, and BB from their restraints. We now have the mid-movie battle scene where Optimus fights Lockdown while BB and Drift are to bring the humans to safety. The battle ends with Lockdown subduing Prime and killing Sideswipe. Bumblebee and Drift escape with the humans.

Optimus is brought to Lockdown’s ship, now landed near the remains of Autobot City, and thrown into Lockdown’s cells. Here he encounters a host of old friends such as Hound, but also quite a few old enemies. Plus the Dinobots, with Grimlock immediately challenging Optimus Prime for leadership of the prisoner group. Optimus wins, though, and quickly unites the various factions against Lockdown. At first opportunity, they will fight.

Back on the planet. Bumblebee, Drift, and Attinger debate what to do now, while Cade just wants to leave. Tessa is thankful to Drift for saving her life, though, and wants to help. Another broadcast from Lockdown tells the world that they have 12 hours to surrender the final three remaining Transformers. Drift and Bumblebee wonder who number 3 is. Attinger plans to release Project Centurion, a batallion of warrior robots built from the remains of the Decepticons and controled by human drivers. Meanwhile Drift wants to sneak back aboard the ship and free the prisoners, but he fears the internal sensors will immediately detect him. Tessa wonders whether they’ll detect humans.

Drift smuggles Tessa and Cade (who has unsuccessfully tried to stop Tessa from his foolishness) unto the ship and like they figured, the sensors don’t detect them. While Drift plays diversion, the two humans manage to find the prisoners and free them. Drift signals Attinger, who launches the attack of the Centurion squadron.

Big end-of-movie battle scene. Drift sacrifices himself to save Tessa’s life, with his last breath saying he always wondered whether he’d make a good Autobot. Most of the Centurion drones are destroyed, but give a good showing of themselves, destroying most of Lockdown’s army. Optimus and Grimlock fight together and defeat Lockdown, learning that he was working for the Transformers’ creators, who “want their toys back”.

Movie ends with Optimus and most of the Transformers preparing to launch into space on Lockdown’s ship, looking for the creators. Only a small force led by Bumblebee will remain on Earth, just in case there are further threats to Earth out there and to look for the mystery Transformer Lockdown’s scans have detected. As the ship launches and the humans wave goodbye, a clean-up crew load the remaining Centurion robots onto transports. As they do so, the eyes of a particularly big Centurion robot briefly glow and a voice growls “I still function”, but nobody notices.